Making the economy connection with hunting

In 1882, our family settled here under the Homestead Act.

The land provided my family with the means to start Rolling Plains Adventures, a hunting lodge located on the plains near historic McKenzie, just east of Bismarck. We provide an unforgettable hunting experience from September through March and lodging year round. 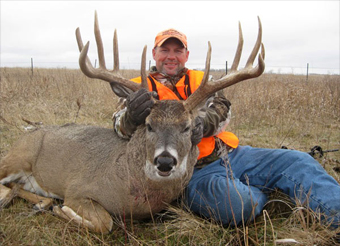 As a family, we know the importance of keeping the hunting tradition alive for generations to come.

The anticipation of hunting season far surpasses the excitement of watching the Super Bowl or the World Series for many of us in North Dakota.

In addition, I was surprised when I realized how immensely important hunting is to our local economy in North Dakota.

I want to make the connection for people because I feel like it’s a connection that is rarely made or attributed to our shotguns and rifles.

In North Dakota alone, roughly 139,000 people hunt every year.  The trickle-down effect of this is enormous. Hunters eat at local restaurants, stay in local hotels, shop at our stores. And it’s directly impacting our economy.

If you combine all the days of hunting that people do in North Dakota every year, it would equate to a total of 1.6 million days.

The shopping, hotel stays and dinning out provides $10.5 million in state taxes, according to the Congressional Sportsmen’s Foundation.

This past election cycle, one of the biggest things our political candidates talked about was jobs and the importance of keeping them and creating new ones.

Hunting single-handedly supports 3,000 jobs in North Dakota. That number is astonishing because it’s on par with some of our largest employers in the state.

Hunters not only help our economy, they also are extremely focused on conservation. Protecting our wildlife, restoring populations and expanding habitat are things that hunters support and appreciate.

When hunters purchase guns or ammunition, 11 percent of the sale, because of the Pittman Robertson Act, goes to a special fund that is put in place for wildlife conservation and hunter training.

As you can see, the favorite hobby that many North Dakotans take part in every year makes a huge impact on our state.

Hopefully, when you go to your local sporting goods store to pick up your hunting merchandise, or when you’re eating out at a restaurant after a long day in the woods, you will remember and appreciate the impact you are having on North Dakota’s great economy.